Most of us live in older homes, condos, or apartments where the walls were long ago constructed. Opening them to string network cable is a less than desireable option. It's expensive and messy. Sure we're as good as Tim the Toolman, but honestly his rewiring projects seldom met with success.

But, hey! You just bought that new network streaming device and have it connected to your superbly beautiful 4K TV. How do you get the best network connection?

Wifi works but is slow and prone to stuttered (buffering) streaming. Even with the newest wireless modem, most streaming devices don't yet support the fastest Wifi, 802.11ac.

For me, the best choice was 'powerline' networking. 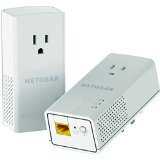 What's that, you may ask?

It's an excellent way to use your home's electrical power wiring to transmit data.  Plus, every room in your house is already wired for electricity, no tearing out the sheetrock.

I used powerline networking and had a connection from my router to my living room entertainment center in about 30 minutes.

BadaBing BadaBoom. You've got a faster than Wifi network connection for around $100, or less.

One final word on options. If you're in a really old home with an ungrounded wiring system, you're going to be stuck at around 500 mbps.  Your adapter will have a simple two prong electrical plug. Don't try to buy the grounded three plug models because your home wiring won't support it.

If your home wiring is the newer grounded standard then you can achieve speeds nearer to 1200 mbps. Your adapter will have the familiar three prong electrical plug.

Finally, these adapters will block access to the outlet they're plugged into, unless you buy one with a pass thru adapter, like the one shown here. Of course, your mileage may vary on speed as you would expect.